From 10:30 in the morning, we had a meeting with members of TPDA (Board Director Kuo Chou Huang, Ms. Jennifer Tsai, Mr. Taopen Chang and Mr. Mike Kao) and Mr. Lin Kun-Fan of Chung Yuan University and Ms. Hsing-Jung Hsu of National Taiwan University of Arts, where workshops would be held the next day. Mr. Sasada and Mr. Mori explained about activities of ASPaC and ASPaC Awards 2016. We had a variety of questions from them but we felt they were very positive about the project, showing a good spirit of participation. In the afternoon, we had a meeting concerning workshops. Mr. Lin Kun-Fan and Ms. Hsing-Jung Hsu offered to be an interpreter in the lecture and so we confirmed lecture materials and the workshop outline. This afternoon meeting was joined by Ms. Celine Liao of TPDA, who would be in the workshop as a teacher and Mr.Yabe, who had just arrived in Taiwan. We were empowered by the arrival of Mr. Yabe, since half of ASPaC members had left after Shanghai visit.

The second day of Taiwan, two workshops were held separately. Mr. Sasada and Ms. Allan went to National Taiwan University of Arts, where international film directors were produced. Ms. Allan explained about JPDA and ASPaC, followed by the lecture “Branding Power created by package design” by Mr. Sasada and then the explanation of the workshop. For the workshop, another room was prepared. Students sit at a fixed table for each group. When Mr. Sasada said a word “Let’s do short self –introduction first. Some may never be in the same class before”, the class suddenly laughed. In fact students with various grades gathered for the workshop. There were also three students from Chaoyang University of Technology in Taichung, where Mr. Mike Kao of TPDA taught. It took them two and a half hours to get to this workshop place.

“Let’s enjoy the workshop, biting ‘Koala no march’!” More applause. They started with concept sheet. There were active discussions in each table. 40 minutes passed very quickly. The work proceeded with discussions. Cute Koala characters were drawn on to imitation paper. Some students cut and connected the package, working on the floor or in the corridor in spreading imitation paper.

Then, two students came in. They were talking with Ms. Hsing-Jung Hsu. They turned out be the first grade students who were not able to join the workshop due to limited participation. We felt sorry for this and gave them “Koala no march” and ASPaC fryer instead. In return, they promised that they would take part in ASPaC2016. When Ms. Hsing-Jung Hsu announced that it was nearly the time for finish, some students pleaded with her not to say that. We sensed their eagerness to continue the work. Finally, there came the time for presentation. We were impressed and surprised at their unique ideas. There was an impromptu three-dimensional object made by an empty box, or a presentation with adlib performance, all of which would lead to the marvelous presentations with lots of laughter from students and teachers together. NTUA students seemed to be creative, unconventional, and positive to enjoy working.

Another workshop for the second day in Taiwan took place at Chung Yuan University that Taiwan is proud of as a prestigious university. Mr. Mori introduced JPDA, followed by ASPaC outlines and Awards explanation in front of more than 200 students gathered in the lecture hall. Then Mr. Yabe gave a seminar entitled “Regional revitalization and design bridging Japan and Asia”. We saw many eager students taking notes seriously. We were led to believe their keen interests in package design.

After the seminar, we moved into the workshop venue. We heard that Mr. Kimura of GK Graphics gave a lecture every year at Chung Yuan University and some students here understood Japanese. The workshop had started with “Koala no march” and relaxing atmosphere. It turned out to be the shortest ASPaC workshop, however, the work proceeded from discussion, defining the concept, and to creating a design. They asked lots of penetrating questions. Their attitude toward creating a package design was semi-professional. Observing that they never gave up until the end in creating objects, checking them and modifying to complete them, we assumed they received a high design education. In their presentation, there is a large variety of design such as display friendly design for over the counter or package seeking an easiness of eating. We were very much impressed by their presentation skills and the degree of perfection of their works. We were happy to see lots of smiles from teachers and students as well.

Despite the small ASPaC members from Japan, all the workshops were successful, which are largely thanks to the teachers and assistants from the both universities. We are very grateful for their kind support. We sincerely hope all the students we met will participate in ASPaC Awards 2016, and see them in Japan in the near future. 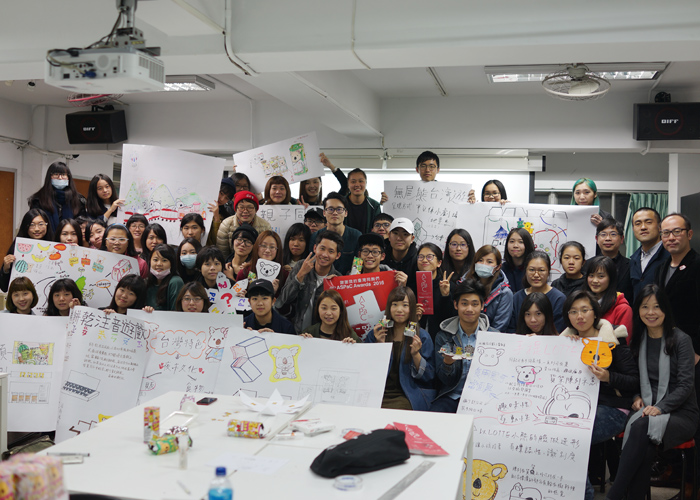